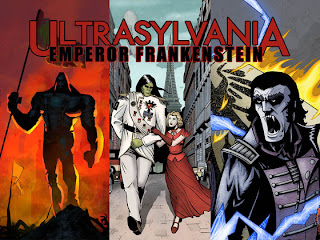 some very good friends of mine are working on the second installment of their graphic novel, which is currently up on kickstarter...'ultrasylvania' is set in an alternate 19th century where dracula and frankenstein's monster rule european kingdoms; the story follows their power struggle, moral choices, and bloodshed that ensues as a result...if you're a fan of classic monster movies, or just monsters in general, i highly recommend checking this out--http://www.kickstarter.com/projects/955965154/ultrasylvania-vol-2-emperor-frankenstein

also, if you're interested in starting from the beginning, you can pick up vol. 1 on amazon here